Berlin students fight to get climate change onto lesson plans 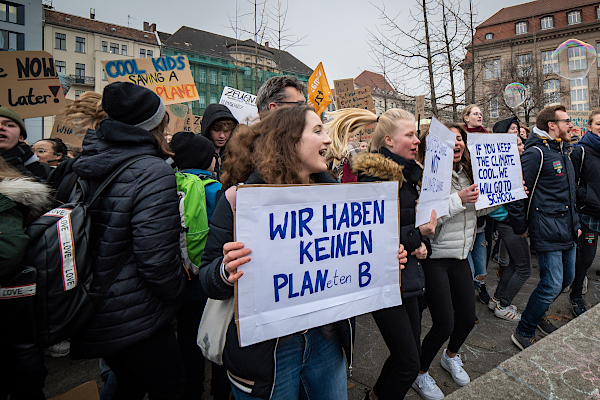 Are schools equipping kids with the skills to understand and deal with climate change? Some German students don’t think so and are trying to have their curriculum changed.

The three students replicated a study that looked at scenarios for cutting CO2 emissions and how often they appeared in science textbooks in Canada. The authors found decisions such as living car-free, which saves the equivalent of 2.4 tons of CO2 emissions per year, made up just 4 percent of recommended actions. A family in the developed world having one child fewer would save 58.6 tons of CO2 per year, and was never cited.

The three students then looked at a range of textbooks in Europe and elsewhere and came to the same conclusion. Bederov and the others know suggestions such as having fewer children are controversial, but students should be aware of the options and discuss them critically. They're now contacting textbook publishers and politicians about changing the school curriculum accordingly.

This, however, is a tall order. Germany’s education system is highly decentralised, with each of the 16 federal states setting its own curriculum. Another challenge is equipping already overwhelmed teachers with the skills to teach climate change.

Some German schools have taken the initiative by pushing an all-encompassing environmental ethos. At the Hagenbeck high school, students learn about biodiversity and sustainable living, as well as how to garden.

The trio of Berlin students gave talks at the United Nations climate conference in December 2018, are campaigning on social media and have been taking part in worldwide school climate strikes.

They hope their campaign will equip students with the skills to combat climate change, says their teacher.

“They all know about the problems,” the students’ biology teacher, Bruce Phillips, says. “But they don’t know what they should be doing to have the most impact on reducing their carbon footprint … We’re really setting them up to get an F-grade.”

Bederov adds, “It’s not enough for the education system to rely on recycling and saying changing light bulbs is the answer.”

This article was written by Jennifer Collins, and originally published on Deutsche Welle. It has been adapted for School Education Gateway with Deutsche Welle’s permission. Full version in English.