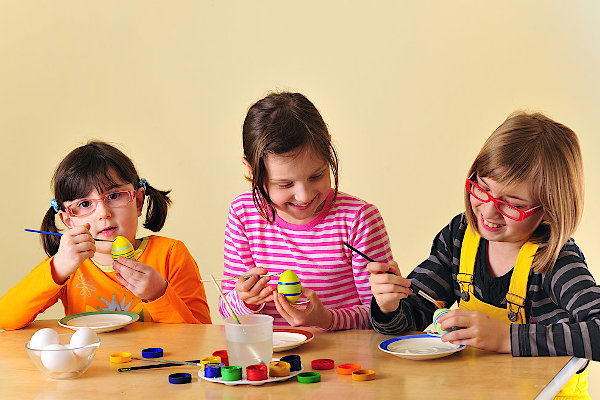 Creativity is undoubtedly one of the most important processes and blend of skills and attitudes that can help young people thrive in the world today. However, most respondents in this survey feel that there are not enough opportunities for creative activities in schools.

Curiosity, imagination, critical thinking, problem-solving and perseverance – which includes positive risk-taking – are essential for preparing current and future generations for success. They are all associated with 'creativity', a process typically of imagining possibilities, making new connections, creating something new, and reflecting on what is being created.

Considering the diverse nature of work today – and the added complexity of working with  of artificial intelligence – it is not surprising that creativity has risen up the list of skills most sought after by employers. This not only concerns employment, but also the competences (knowledge, skills and attitudes) that citizens need to live, thrive and participate in society.

Is it the teacher’s role to cultivate young people’s creativity? Do they have the necessary professional development and resources for facilitating creative experiences for their pupils?

This survey aimed to find out how creativity is approached in schools and what a teacher needs to facilitate creative experiences for pupils. It was open on School Education Gateway from 28 September to 15 November and attracted 565 respondents, 83% of whom were teachers.

1. In your opinion, do pupils in your school or a school you know have enough opportunities for creative experiences (such as developing curiosity, using imagination and solving problems)?

2. How often do pupils have the opportunity to take part in creative activities in the classroom? 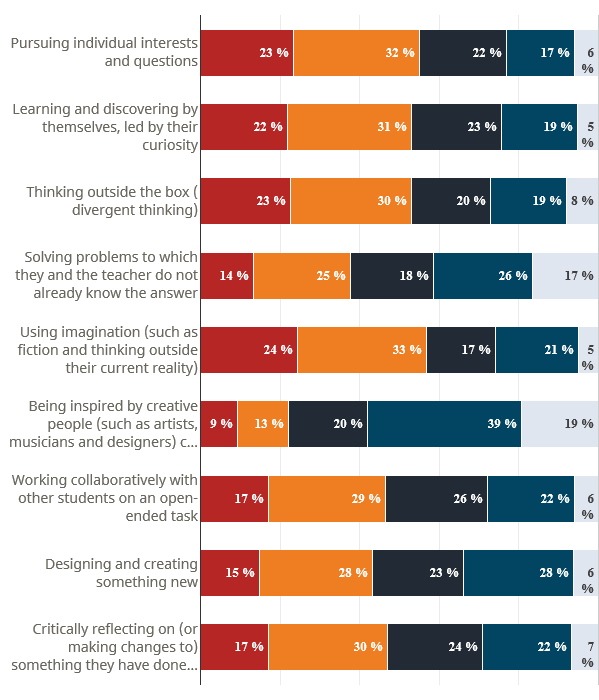 For 55% of respondents, there are opportunities for pupils to pursue individual interests and questions at least once a week or daily, but for 22%, these occur about once a month, and for 23% less often or not at all. We see similar numbers when it comes to the frequency with which pupils learn and discover by themselves (53% once a week or daily, 23% once a month and 24% less than that), as well as for the frequency with which they engage in divergent thinking, that is, thinking outside the box (53%, 20% and 27% respectively) and in using their imagination, as in fiction and thinking outside the current reality (57%, 17% and 26% respectively).

Comparatively less frequent is working collaboratively on an open-ended task, which occurs weekly for 46% of respondents, at least once a month for 26%, and less than that for 28%. Opportunities for designing and creating something new occur weekly or more often in 43% of respondents’ schools, about monthly in 23%, and less often in 34%. We see similar percentages when it comes to critically reflecting on (or making changes to) something they have done or created: 47%, 24% and 29% respectively.

3. In your opinion, who should have (the responsibility/role) to facilitate creative experiences for young people in schools? Choose all that apply. An overwhelming majority of respondents (94%) indicated that teachers across all subject areas should be responsible for facilitating creative experiences for young people. 22% believe that there should be some experts among staff to design these activities for certain courses, and 14% support the idea of only inviting or visiting creative people from outside school, such as local designers, artists and researchers. For 6%, it is not the role of the school to develop creativity in young people, as there are more important priorities.

4. To what extent can you include creativity in your teaching? 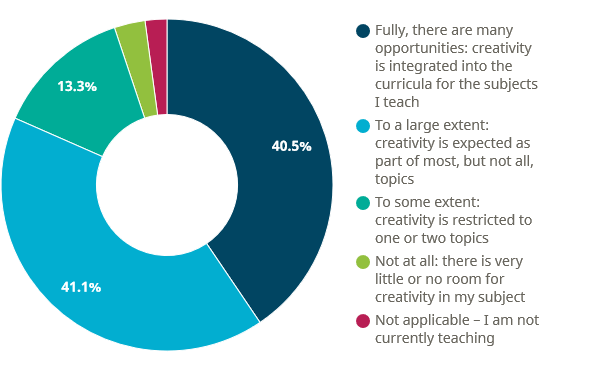 A substantial 81% of respondents indicated that they can integrate creativity into the curricula for the subjects they teach, either fully or to a large extent. Only 13% felt that creativity can be included only to some extent, and an even smaller 3% believe that there is little or no room at all for creativity in their subject.

5. Thinking of your school or a school you know, which of the following types of support does the school provide for teachers to foster creativity and pupils to engage in creative processes? Choose all that apply. 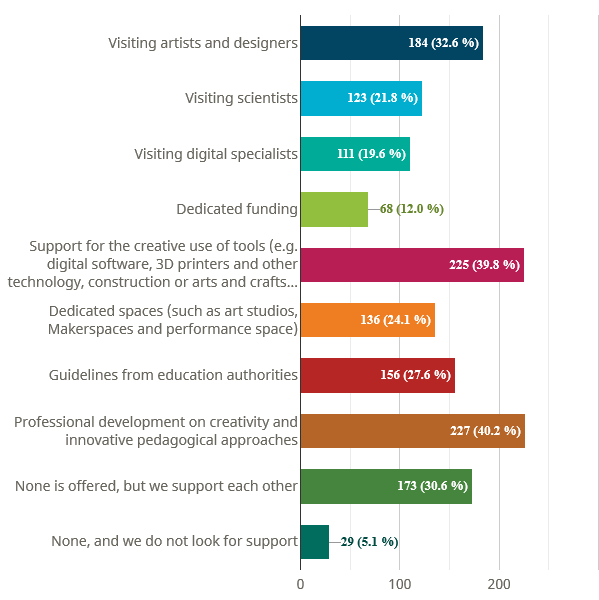 Embedding the use of different tools for learning on the one hand and professional development on creativity and innovative pedagogical approaches on the other represent the most frequent types of support the school provides, both chosen by around 40% of respondents. Visiting artists and designers follow with a percentage of 33%, and peer support with 31%. Only 12% of respondents’ schools receive dedicated funding to support creativity.

There are not enough opportunities for creativity in school, according to most respondents to this survey (76%), and such opportunities, when they do occur, most often involve pupils pursuing individual interests and questions, learning and discovering through their own curiosity, thinking outside the box, and using their imagination.

Findings indicate overwhelming support (from 94% of respondents) for the view that teachers across all subject areas should be responsible for facilitating creative experiences for pupils. The most common types of support provided by schools involve the creative use of different tools for learning and professional development on creativity and innovative pedagogical approaches.

The findings echo those in other surveys (such as Creativity in Schools: A Survey of Teachers in Europe by the European Union Joint Research Centre Institute for Prospective Technological Studies), which suggest that teachers need more support and training to help pupils fully develop their creative potential.