Education Talks: Should media literacy be defined by its disorders? 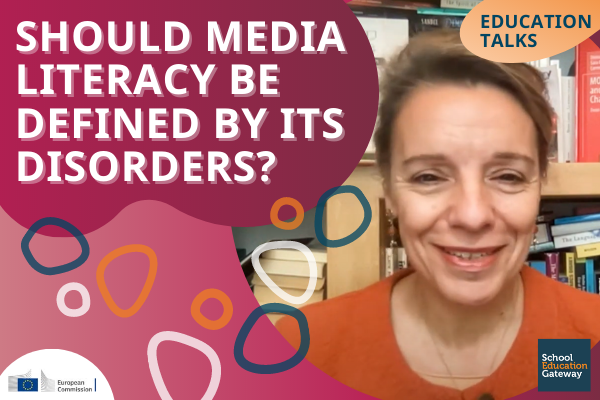 The pandemic has elicited a surge of disinformation and fake news in Europe and elsewhere. Such crises have amplified people’s interest in media literacy, but are we looking at the subject through the right lens? Divina Frau-Meigs, Professor of Media and ICT Sociology at Université Sorbonne Nouvelle, France, argues that media literacy is about more than its disorders, and considers what schools and policymakers can do to promote it.

Hello – I am Divina Frau-Meigs. I am a professor at Sorbonne Nouvelle and a specialist in media and information literacy, a field that I have plowed for now about 40 years.

What is the biggest concern in media literacy right now?

The field of media literacy is thriving at the moment, partly because we’ve had several democratic crises. And so, it is being promoted mostly via the information disorders that are hate speech, fake news, cyberharassment, etc. So one of my concerns is that the holistic vision we have in media literacy, which also takes into account the opportunities and the creativity that is involved in such “learning by doing” pedagogies… is going to be lost. My other concern is that, at least in Europe, we now have a directive, the Directive of Audiovisual Media Services, that makes it an obligation for Member States – but this directive also includes the role of the platforms: the platforms are supposed to do media literacy and to promote it. And I fear that these platforms that have been part of the problem of the information disorders are maybe not the best actors and the most innocent actors to get involved in media and information literacy.

How has the pandemic changed the landscape of media literacy?

The landscape of media literacy has changed a lot because of COVID. So for instance, the European Union has created EDMO, which is an observatory for digital media that is mostly about disinformation and fact-checking; it has created at the DG EAC a new expert group, in which I am, to promote digital literacy. So there’s lots of opportunities for media and information literacy to be showcased as one of the solutions.

How can schools better tackle issues such as radicalisation and conspiracy theories?

Creating an awareness at the school level – the team of leaders in the school – is key. Because after that, they can prepare their own strategies and pre-bunk all of this, be ready in anticipation. They can, for instance, have young people who are ambassadors and who can signal when there is a problem among peers, and some examples of that kind. They can train some specific teachers to do it with other colleagues. They can bring outside help, outside experts: journalists, animators and mediators from the police, from other sectors of activity. It is often put, at least in France, under the heading of “well-being and good school climate”, because of course what’s happening online has consequences offline, and conversely.

What do you hope for the future of media literacy policies and practices in Europe?

I am very hopeful for the future of media and information literacy. We have the whole range of echelons that are now activated. Of course, we now have to make sure this is implemented. And what I'm going to fight for is two things: One is what I call MILComp, which is to say, getting to have a framework of competences for media and information literacy that can be attached to the DigComp, the framework that we have now for digital competences – and we are working on that. The other thrust is to make sure that media literacy becomes part of a basic core curriculum from K1 to K12, because it cannot be used just from time to time as an adjustment variable when you have a minute, when you have a spare hour. It has been transversal and it should remain so, but we deserve to have it also as one of the core subjects.