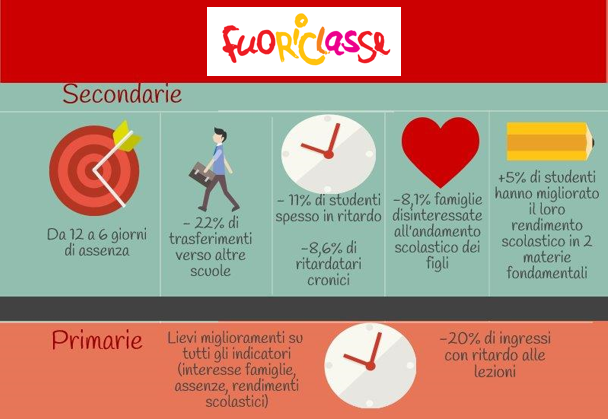 Fuoriclasse (Italy) is an integrated intervention model against early school leaving aimed at students, teachers and families. It offers activities to support motivation to study and learn, to ensure the full implementation of the right to education, as enshrined in the UN Convention on the Rights of the Child.

Fuoriclasse’s educational interventions in and outside schools are proposed to the 4th-5th grade of primary school and 2nd-3rd grade of secondary, to support the transition between school levels. The project works on four complementary, multidimensional areas of intervention:

The Fuoriclasse actions include for example motivational workshops during school hours, school camps as non-formal education, support for studies for students with learning difficulties, tips for increasing well-being in school, and meetings to facilitate school-family dialogue.

The evaluation indicates results such as that late class admissions have halved, school absences have reduced, and families have increased interest in their children’s school performance.