Your Europe, Your Say! 2018: teenagers debate on the future of European culture 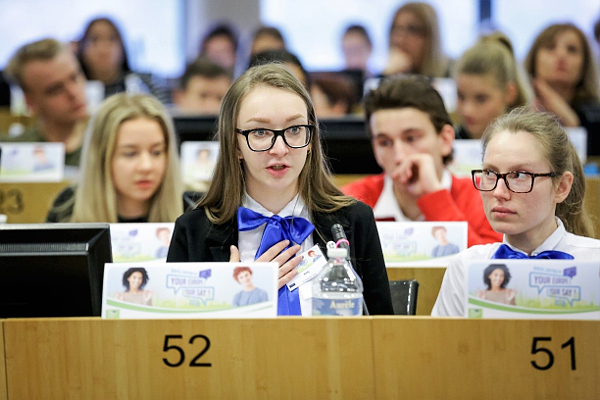 On 15-16 March, 99 students and 34 teachers came together in Brussels for Your Europe, Your Say! (YEYS), the European Economic and Social Committee’s (EESC) annual youth event.

YEYS started in 2010 with the goal of connecting young people with the European Union. Every year, 16- to 18-year-old pupils from all EU Member States and from the candidate countries come to Brussels for two days and work together to draw up resolutions (proposals and hopes for their future as European citizens), which will then be passed to the EU institutions.

In a series of workshops, the young participants discussed, debated and fine-tuned a range of ideas on European cultural heritage. In the final plenary session, they presented their recommendations and voted to select the three they saw as most important.

The winning recommendations were The opportunity of discovering other cultures through travelling; Preserve culture, learn from the past and use it to build the future; and Experiment with culture. They will be sent to the European Commission and the European Parliament and presented by a delegation of students during the EESC commemorative plenary for the 60th anniversary of the institution on 24 May. Read the recommendation descriptions here.

More follow-up actions will be carried out with the European Commission and Europa Nostra.

Here is a video of last year’s proceedings: