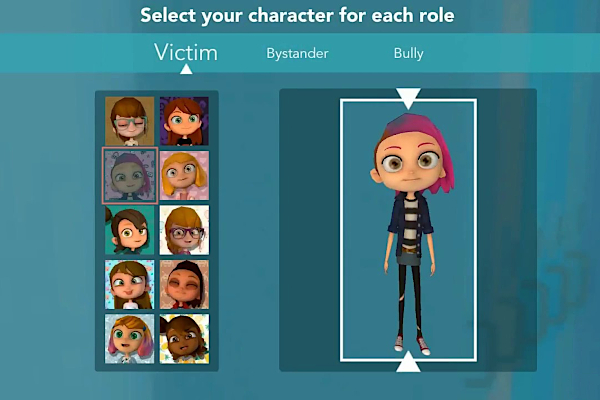 In the last decade, interest in serious games (SG) as a means for fostering learning has increased substantially, because playing digital games has become an extremely popular activity. The term refers to games used for purposes beyond pure amusement; there is a huge variety of SGs, which differ both in terms of genre (strategy, brain training, adventure) and the type of knowledge or skill trained (health, interpersonal communication, academic knowledge).

There is evidence that prosocial video game exposure increases helping behaviour and decreases aggression. Therefore, the goal of the project eConfidence (H2020) was to develop and evaluate a serious game aimed at changing the behaviour of children in bullying situations. A multidisciplinary team of psychologists, game designers and educationists worked together in developing a game titled School of Empathy, to enhance the helping behaviour of bystanders who witnessed bullying situations. The game was applied with 12- to 14-year-old students.

The results of the pilot study point to important effects of game experiences on game outcomes, especially immersion, challenge and perceived competence during the playthrough. Students who felt that they were competent while playing the game reported more assertive reactions after gaming sessions. The results also call attention to the importance of players’ pre-game characteristics, such as compassion or assertive behaviour, which could affect the way they play the game and the game outcomes. Previous knowledge about appropriate reactions in bullying situations was a crucial determinant of game effectiveness in our study. Namely, the designed game could be effective when applied with students who were less knowledgeable about appropriate behaviour in bullying situations.

In order for an anti-bullying SG to be more effective, it could be applied as part of a school-wide programme – enriched with discussion about the playing experience and about application of skills learned during the game in real-life situations.

Svjetlana Kolić-Vehovec is a professor at the Faculty of Humanities and Social Sciences of the University of Rijeka, Croatia.