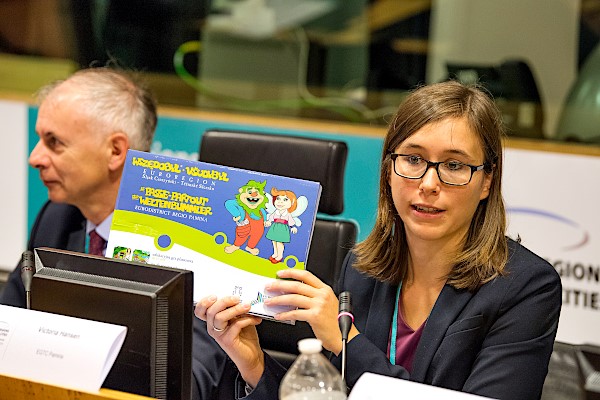 In October, the European Week of Regions and Cities brought together 6000 local, regional, national and European decision-makers and experts for more than 100 workshops and debates, exhibitions and networking opportunities. One of these was dedicated to plurilingualism and cultural cooperation in cross-border regions.

The European Commission promotes multilingualism and cultural diversity by encouraging young people in Europe to learn languages through interactive learning approaches and workshops. However, most of the time, foreign language learning is underestimated as a school subject and students tend not to be able to use the language they studied after leaving school.

Young people living in bilingual or cross-border regions can turn their location to their advantage and engage with the language of their neighbours, but this requires active steps by education stakeholders to encourage cross-border cooperation and culture coexistence. Teachers also need to be able to develop their skills by using culturally diverse materials.

Tools and resources exist, but not in great number and more could be developed. One example which has already become popular is the Passe Partout online game, taking students on a virtual trip through the border regions of France, Germany and Switzerland. This game motivates students to learn about the neighbouring country’s culture and practise the foreign language through play.

Another initiative aims to bring the special living environment of the neighbouring countries of Germany, Poland and Czech Republic closer to children in the nursery setting. The project, which features three comic characters called Biedronka, Maus und Žába, includes various interactive games and an online platform, as well as guidance for teachers. In addition, trainers visit Polish and Czech kindergartens to bring the regional history and customs of the region closer to the children. The project leaders note that the work is not only valuable for the children but also drives the “creation of a Euro regional identity”.

This same thread runs through every one of the cited initiatives, recalling the words of Jean Monnet, one of the founding fathers of the European Union: “If it had to be redone, I would start with the culture.”